The Ann Arbor Symphony Orchestra has been independently and favorably compared to musical giants such as the Leipzig Gewandhaus, the Boston Symphony and the Detroit Symphony Orchestras.  All of these orchestras play regularly here, and our quality-conscious audience equates us to them with their discretionary entertainment dollars. This past season the A2SO announced its second-largest subscriber base in its 87-year history, underscoring the quality of the musical experience delivered to our growing audience. 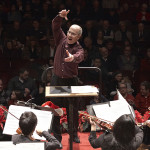 A2SO concerts frequently feature world-class guest soloists including opening this season with Garrick Ohlsson in Hill Auditorium.   Our Symphony is most privileged to be part of a community already enriched with musical talent including Concertmaster Aaron Berofsky and Principal Oboist Tim Michling.   We are proud to play concerts in all venues – from area farmers markets to school classroom, and from libraries to day care centers and senior centers. 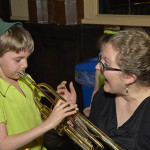 Whether on the ipod or radio, in the concert hall or the classroom, the A2SO is passionately committed to lead and enrich the culture of the region.  We attract, inspire and educate the most diverse audience possible, fosters a growing appreciation for orchestral music and regional talent, and provide imaginative programming through community involvement.