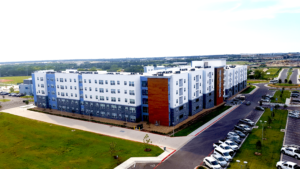 Park West Student Living at Texas A&M University in College Station is the country’s largest ever single-phase student housing project. With 15 buildings across 47 acres, the complex has 3,406 beds among one-, two-, and three-bedroom apartments. The sleek design and amenities – gyms, pools, gaming lounges, jogging trails, convenience stores and coffee shops – make this a first-rate living option for students who attend Texas A&M, one of the largest universities in the United States. Located on the west side of the Texas A&M campus, Park West is just across the street from the famed Texas Aggie Kyle Field. The unique project is the result of a partnership that includes the Texas A&M University System, the National Campus Community Development Corporation, and collegiate housing developer, Servitas.

One of the top priorities in developing any residential setting, especially a collegiate student residential complex, is access control. When Synergy Fiber, a recognized leader in managed communications services, was selected by Servitas as the total technology partner during the construction of Park West, Chief Executive Officer Norman Roe knew SALTO Systems was the best access control provider for a project of this size.

“Servitas was looking to avoid some of the problems they had experienced with access control providers in the past,” says Roe. “They knew that for a project the size of Park West, they would never ever want to go back to doors for programming. They had experienced pain points in the past with access control integrations that required multiple credentials, constant maintenance and difficulty for the local staff to manage the systems.” 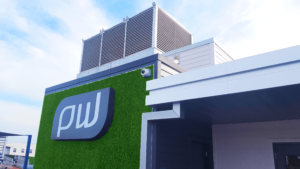 To provide a comprehensive access control security solution for Park West, Roe and his team at Synergy Fiber chose to install SALTO electronic locks, readers and controllers to be managed by SALTO’s ProAccess SPACE software. The property has its own dedicated SALTO server and all controllers (4200 series) are connected to the same local switch network, but are on their own dedicated security V-Lan. Nearly 1,100 doors throughout Park West are outfitted with SALTO’s XS4 offline escutcheons (full body escutcheons with mortise lockset) and 79 online locks. SALTO locks are also being used to protect the property’s datacenter, which hosts its own cloud for the client and server cabinets. SALTO locks also protect and provide audit trail for Park West’s storage units which, at times, can house millions of dollars’ worth of inventory.

Synergy Fiber Product Manager Douglas Karaska says SALTO’s revolutionary SALTO Virtual Network (SVN) data-on-card technology improves the ease of use throughout the life of the project, making the transition from development and construction to operational and functional, a smooth one.

SALTO’s SVN allows stand-alone locks to read, receive, and write information via an encrypted and secure data-on-card system that utilizes the capabilities of RFID read/write technology. In SVN, all access data is stored on and distributed by its operating smartcard or device. When presenting a credential to an offline stand-alone door, not only does this control access rights to that door but, thanks to two-way communication, the door also writes data – like blacklist information or battery status – back to the smartcard. The smartcard then transmits this information back to the server via online wall readers that update and receive information from the cards anytime and anywhere in the facility.

“The best features that the ProAccess SPACE software brings to the table are the flexibility and accessibility it gives,” says Karaska. “It’s easy to use and it’s scalable.”

ProAccess SPACE also offers the convenience of being browser based so no local client is required for use and it’s compatible with common browsers like Chrome and Firefox, he says.

The residents have easily adapted to the SALTO solution since the facility opened its doors in August of 2017. They use contactless RFID key fobs or bracelets for entry into the facility, interior bedroom units, and the property’s amenities. For garage entry, windshield stickers are used to obtain access.

Roe says SALTO’s access control installation has gone smoothly for the massive residential property, and it is just what he expected.

“We knew for a project this unique, SALTO was the only solution,” says Roe. “SALTO stands alone in this vertical; every other access control solution available on the market is playing catch up to the technology native to the SALTO solution.”